More than 1500 unaccompanied children from Afghanistan arrived in the US in August and September 2021, with about 400 arriving in Michigan and placed in a residential facility. Muslim Foster Care Association was one of the first nonprofits to step up to support these children to provide them with religious and solace services.

Read on to hear our story…

Our partnership with ORR and Starr Commonwealth

In August 2021 the US Military pulled out of Afghanistan, followed by the collapse of the Government and a frenzied rush of people all trying to get out of the country. The US expected to welcome a large number of Afghan refugees into the country but was quite unprepared for the rush. As refugees started flooding in, there were hundreds of unaccompanied children among the throng. These children, some as young as babies and toddlers, but mostly teens, were housed in various detention centers across the nation, and a large multitude were welcomed at Starr Commonwealth in Albion MI.

The staff at Starr Commonwealth reached out to the MFCA requesting for training for the youth workers as most of them were only trained to care for youth from Central America. Most of the staff were unfamiliar with the culture of Afghanistan and needed information on making faith based accommodations.

In September 2021, MFCA staff along with Dari and Pashto speaking volunteers from the Kalamazoo community held religious services at the Starr Commonwealth for all the Afghan youth housed there. We brought with us much needed Islamic materials such as Qurans, prayer mats, hijabs for the girls, kufi hats for the boys and prayer beads. Needless to say, the youth were overjoyed to see culturally familiar faces! The religious services and presence of the Imam (religious elder) was a means of solace for them.

Following this we provided a number of services for the youth and ORR staff including staff training on Islamic practices, Afghan cultural understanding, dietary guidance, hygiene requirements, behavioral issues, special activities, and holidays. Our staff and volunteers were present every weekend to provide various religious services including congregational prayers, halaqas (workshop circles), and individual mentoring/solace. We provided over 200 new Qurans (In Arabic, English, and Dari), prayer mats and beads, gender appropriate clothing, and other cultural materials. 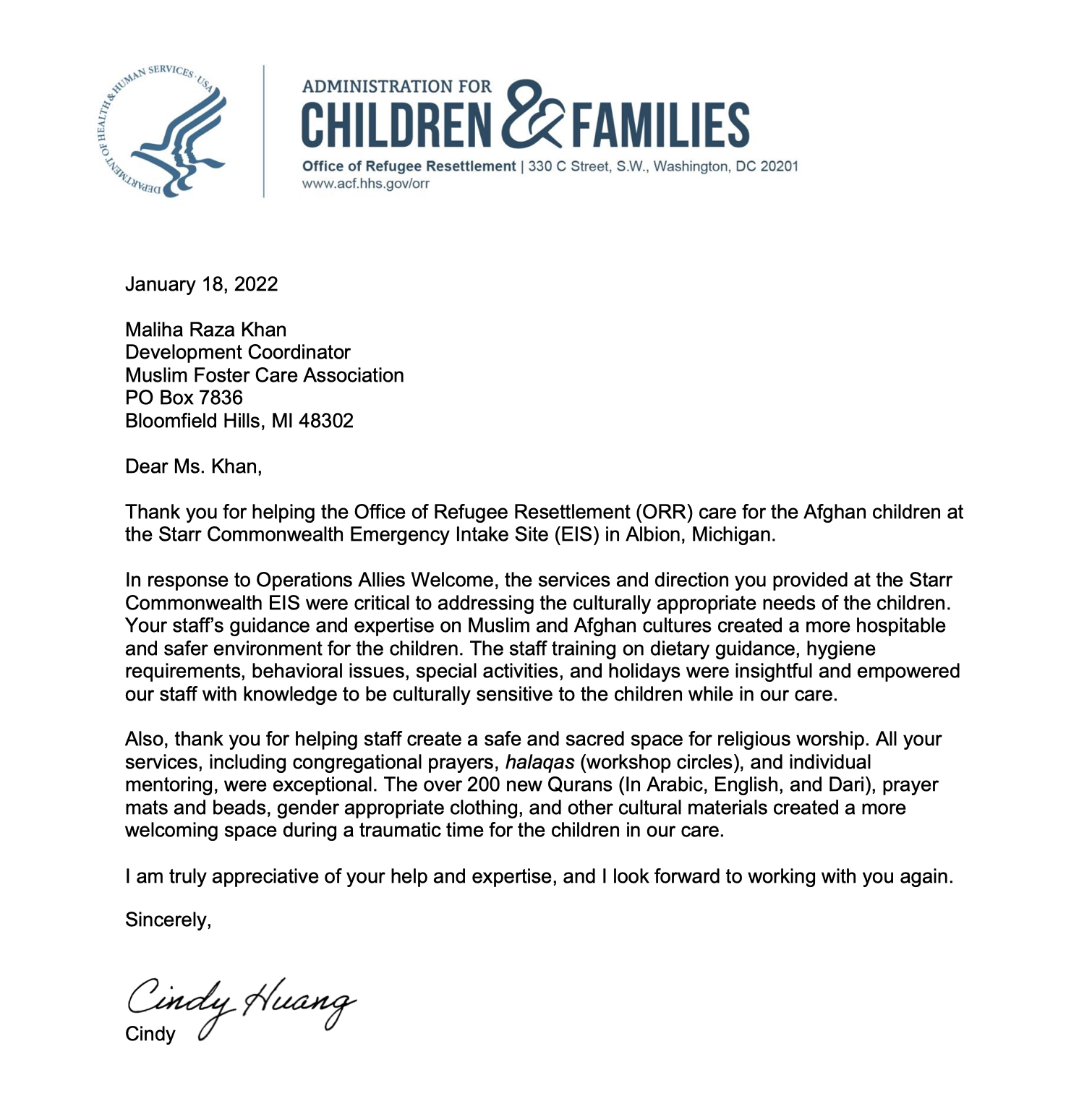 Volunteers made a significant difference

Our initial efforts to welcome Afghan refugee unaccompanied youth into the Michigan community would not have been possible without our motivated and passionate team of volunteers who got together on short notice to support our efforts. Among them were Samir Bayan, an Afghan student at Western Michigan University. Fluent in Dari and Pashto, Samir was an invaluable support as an interpreter as well as a mentor to the young Afghan boys at Starr Commonwealth. Another volunteer was Muneesha Hussain – an educator who designed and implemented dhikr circles and journaling for the girls.

Here is what they said about their experience:

“I would like to thank MFCA for giving me the wonderful volunteering opportunity to meet the Afghan Refugee Kids. We recited surahs, duaas and engaged the kids in mindful activities such as reflective drawings and reading. As an educator, I enjoyed connecting and working with the kids. The kids were delighted to receive the goody bags, prayer rugs, scarves, prayer beads, and the wonderful contributions collected from donations! The smiles on their faces were truly priceless. I would like to thank everyone for their contributions & donations without which we could not have made the visit exciting and promising for the kids that we care about!”

“I had the honor to visit our Afghan refugee youths during a visit arranged by MFCA. We all together performed the Friday prayers. A young boy who is around 13 years old volunteered to perform the Adhan and then Takbeer for the prayers. Another kid who is around 5 years of old standing in the second row also participated in the prayers, it was amazing and of course, encouraging, and impressive. Most of them were young children, but one could realize them as being grown men and this is what the Afghan spirit is. May Allah SWT bring long-lasting peace to our country. I wish these kids the very best of luck and I am very thankful to MFCA and the people of the USA for their humanitarian support extended towards our Afghan refugee kids.”

Once the children moved out of the residential facilities into the greater Michigan community, they were placed in long term foster homes or in youth homes. Muslim Foster Care Association continued to provide them with various services. Our association with agencies such as Bethany Christian Services and Samaritas has enabled us to keep Muslim youth from Afghanistan connected to their faith community, be able to attend religious services at various mosques, and be able to practice their faith wherever they are.

We have delivered Iftar meals to their doors during Ramadan, arranged for visits from local Imams and volunteers, sent them gift cards during the Eid holidays, and organized training programs and cooking classes. Our objective is to help them become thriving members of the larger American community while being provided all the support they need to practice their faith.